So you've decided to jailbreak your device, downloaded a proper utility from the website pangu or taig, connected your smartphone to your computer, and launched the application. After several reboots, a message was displayed on the screen confirming the jailbreak's success and the Cydia application was installed on the device. It seems that everything worked fine, but what's next? If you've ever asked yourself this question, this article is for you.

One of jailbreaking's most beneficial advantages is the ability to fine-tune the device, improve its interface, and expand its functionality. Users get all these advantages only after the installation of special software also known as "tweaks." Nobody can say exactly how many tweaks exist out there today, but it's obvious that there are a lot more of them than a typical user needs. So we will use this article to have a crack at describing the most useful tweaks that can help turn your iPhone into what might be called an "ideal smartphone."

Most reviewed tweaks require Respring, or the rebooting of the device's Springboard (lasting 10-15 seconds) in order to introduce changes into the system.

When you install the tweaks described in this article, don't forget to remove old ones that perform similar functions, otherwise the device may switch into Safe Mode.

Before installation, tweaks need to be downloaded to a certain location; the most convenient thing to do is to use Cydia repositories. The pre-installed repositories lack a lot of different tweaks, and others require payment, so we recommend connecting the following repositories:

There's no need to sweat using the BigBoss repository. It's one of the few sources where finding unstable or unsafe tweaks is nearly impossible.

Some tweaks should be installed right after jailbreaking the device because without them further customization of the device might prove impossible. Usually these types of tweaks are available in the BigBoss standard repository.

First of all, take a look at the WhiteTerminal application. This utility allows users to work with the device in the command line mode and makes it possible to launch many other utilities that lack a graphic interface. This tweak is very simple and imitates the Terminal application on OS X.

If you plan to install cracked applications on the device (which is one of the main reasons to jailbreak in the first place), download AppSync. The tweak available in the https://cydia.appaddict.org/ repository lets users download detached software from computers using solutions like iFunBox or iTools.

It is also a good idea to get a file manager (FM). The best FM for jailbroken iOS devices is iFile. This utility was initially not very different from its various competitors, but now it's received a set of additional functions to become a truly universal solution. Main features:

If you intend to work with the device's file system from your computer, you will need afc2add or Apple File Conduit "2". Neither of these utilities have any interface, and they both have just one purpose: to open up access to the root of the device's FS when connected to a desktop.

WinterBoard tweak is used for global changes of the Springboard (desktop); a huge number of different themes and add-ons have been created for it. It can change the look of the dock and icons, let users add widgets to the desktop, and much more. 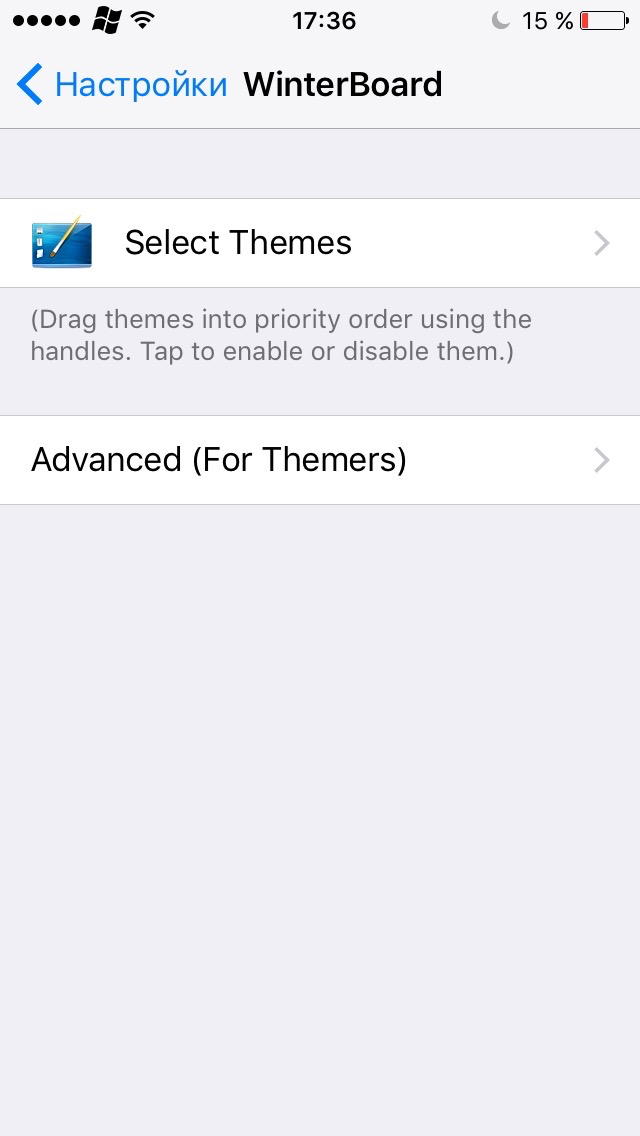 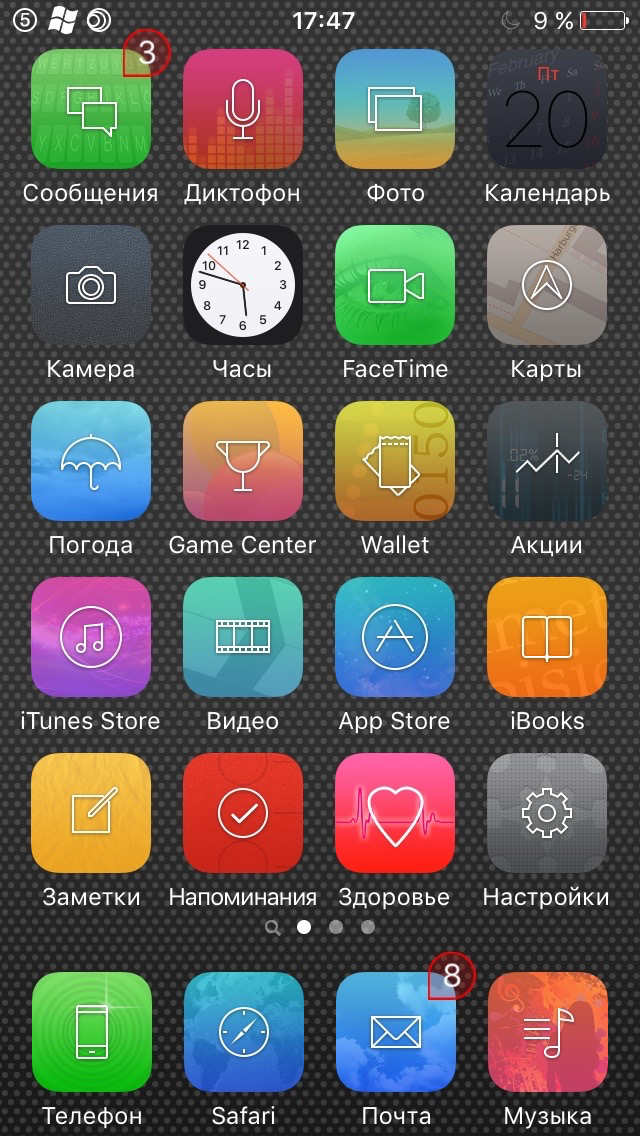 All WinterBoard themes are stored in the /Library/Themes/ folder, where they can be extracted and modified. There is also a huge number of high-quality and elaborate themes that not only change the view of the desktop, but also some menus as well (while remaining highly customizable).

Despite the fact that iPhones have more standard settings than many firmware versions of Android, some options are still missing. This issue mostly concerns the fine-tuning of the interface and can be solved using Springtomize, which is already available for iOS 9. The utility's settings are divided into option sections for specific interface elements. You can slow down the speed of animation, configure the creation of multi-level folders, remove the slider from the lock screen or conceal dividers in the Control Center, enter in the operator's own name, and make many other improvements to the interface. 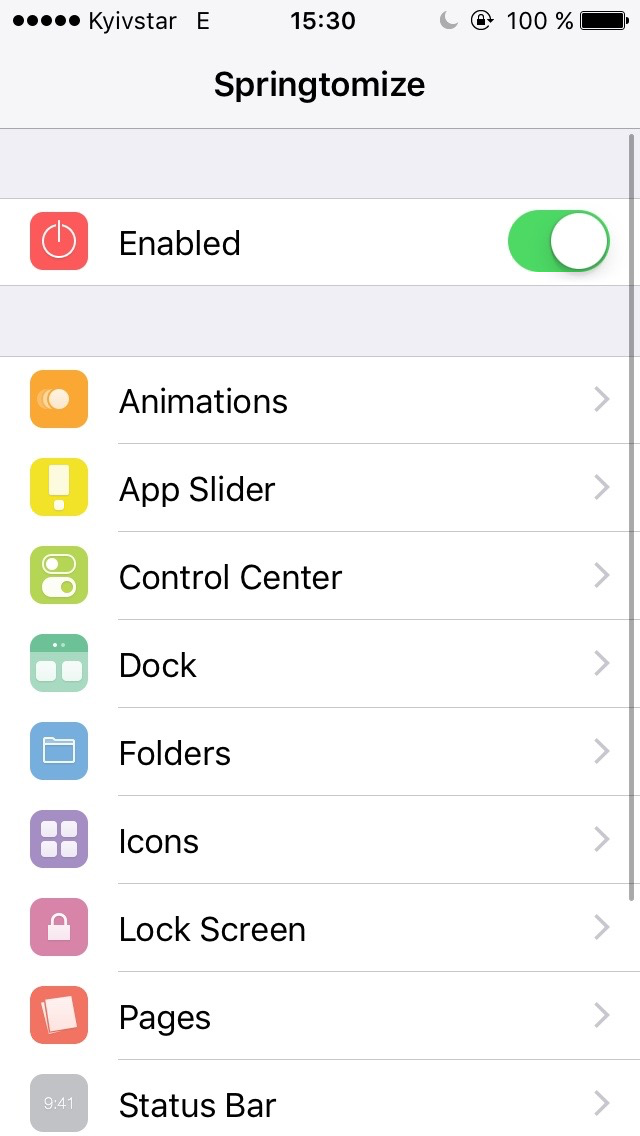 Android users often claim that Apple's OS lacks desktop widgets. The iWidgets tweak adds this functionality. Initially only two widgets are available (analog clock and calendar), however, it is possible to acquire more: WinterBoard themes and Cydia both offer widgets that work using this application. Simply tap an empty spot on the home screen and you will see a menu of widgets available for installation. All widgets are stored in the /User/Library/iWidgets/ folder that users can fill up on their own.

Iconoclasm can be used to change the icon grid. Its settings let users select the necessary grid with options for both all screens at once, and for each individual screen.

Separate settings for each Springboard screen

It's often necessary to expand the functionality of the status bar so that it shows not only current information on the device, but also, for instance, notifications, among other possible functions. All of that can be done using the Confero utility. Here is where the main theme of the status bar and its components can be set. Users can indicate where they want notification icons to be displayed and also set gestures from the Activator (more information on this later).

Zeppelin has been the most popular solution for several years now to change the operator's logo. There are a plethora of icons here that can be used instead of the one we've grown all too familiar with.

Auxo used to be the perfect utility to modify the Control Center and multitasking bar, but along with other alternative applications, this tweak has not been optimized for iOS 9 quite yet. Today it can be replaced by Lylac, which is free and available in several of the repositories we discussed above. Main features of the Lylac tweak: 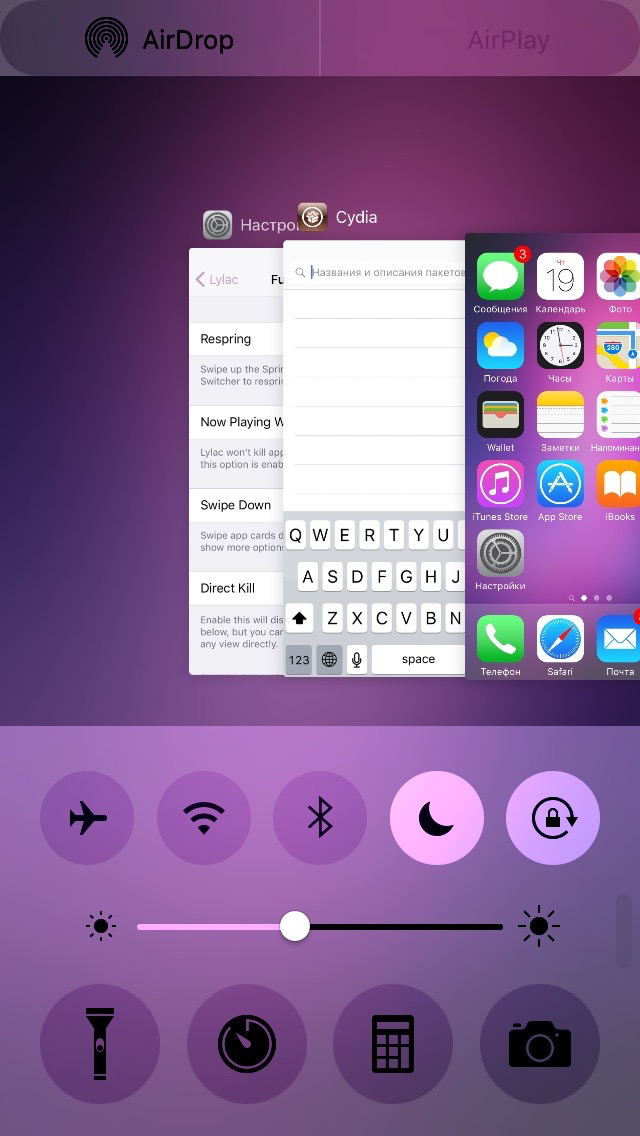 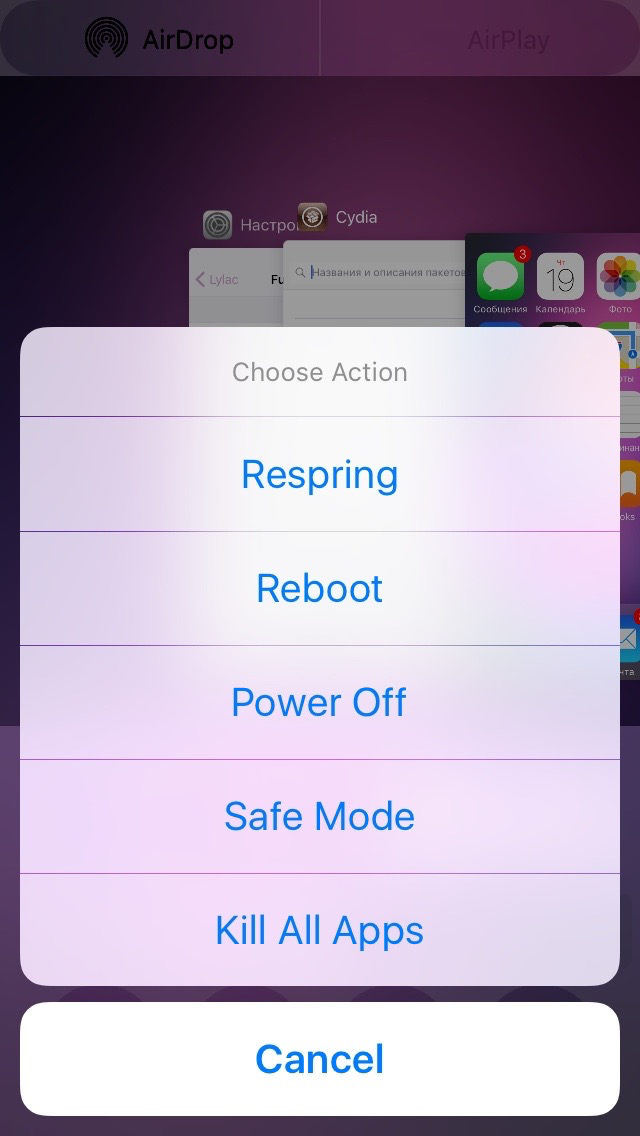 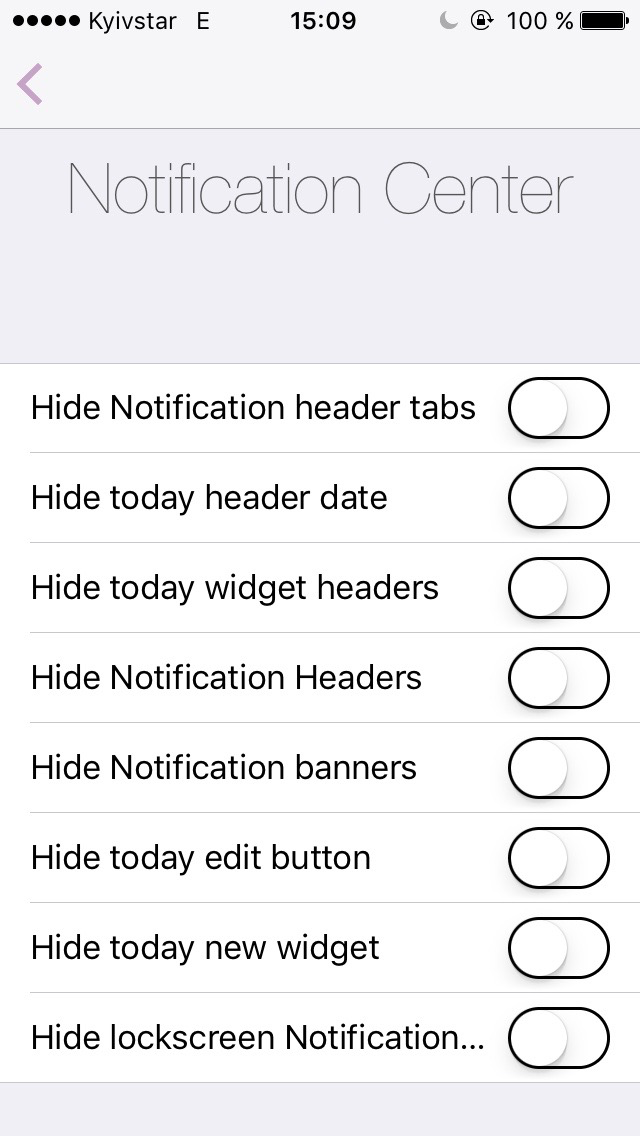 The Grabby tweak opens up the possibility to add several switches to the camera function of the Quick launch bar in the bottom-right corner. The settings are extremely simple: information about the number of required switches and the fine-tuning of each icon.

SubtleLock is another interesting tweak for the lock screen. This allows users to swap out the upper and lower panels of your locked device. The settings for the clock (font, size, style, color, second timer, etc.) and slider (conceal or change the size and text of the inscription) are found in separate sections. 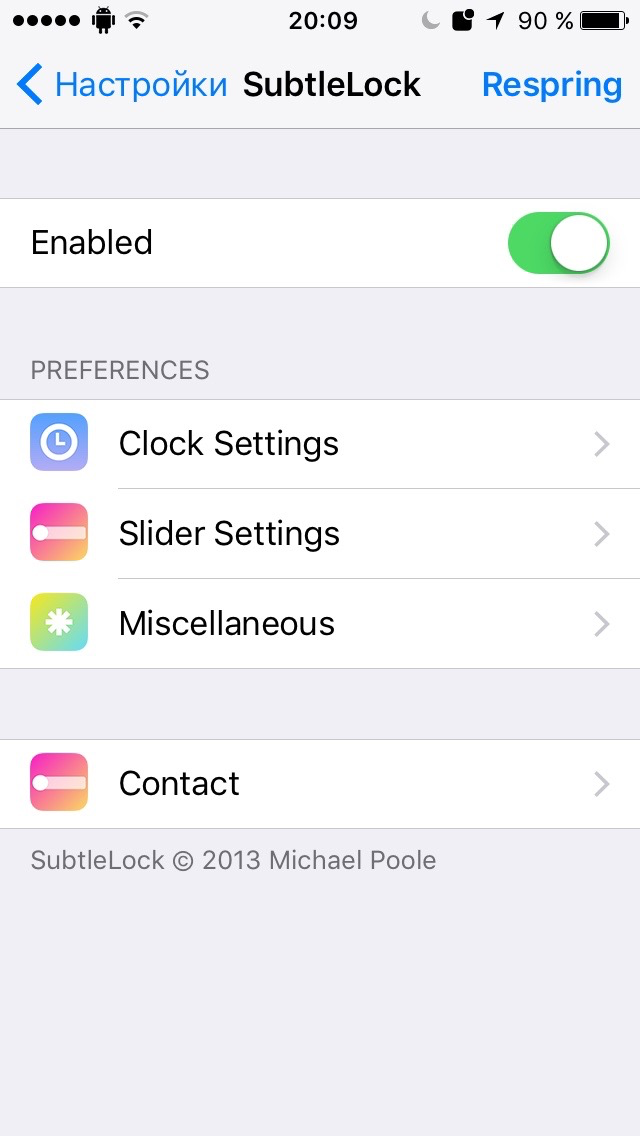 For many users, iOS restrictions seem absurd and ill-conceived. Tweaks designed to bypass them have therefore understandably been available since the early days of jailbreaking. Let's have a look at several popular restrictions and ways to bypass them.

Thanks to Apple's ingenious idea, only music in the special M4R format that lasts no longer than thirty seconds can be downloaded as a ringtone on iPhones. But for whatever reason, users still can't use the native application to set any songs even if they meet those requirements: the file has to be specially downloaded as a ringtone in iTunes. The UnlimTones** tweak was designed to do away with this unpleasant restriction.

The only disadvantage of this application is the abundance of advertising, some of which is even found in the main menu. 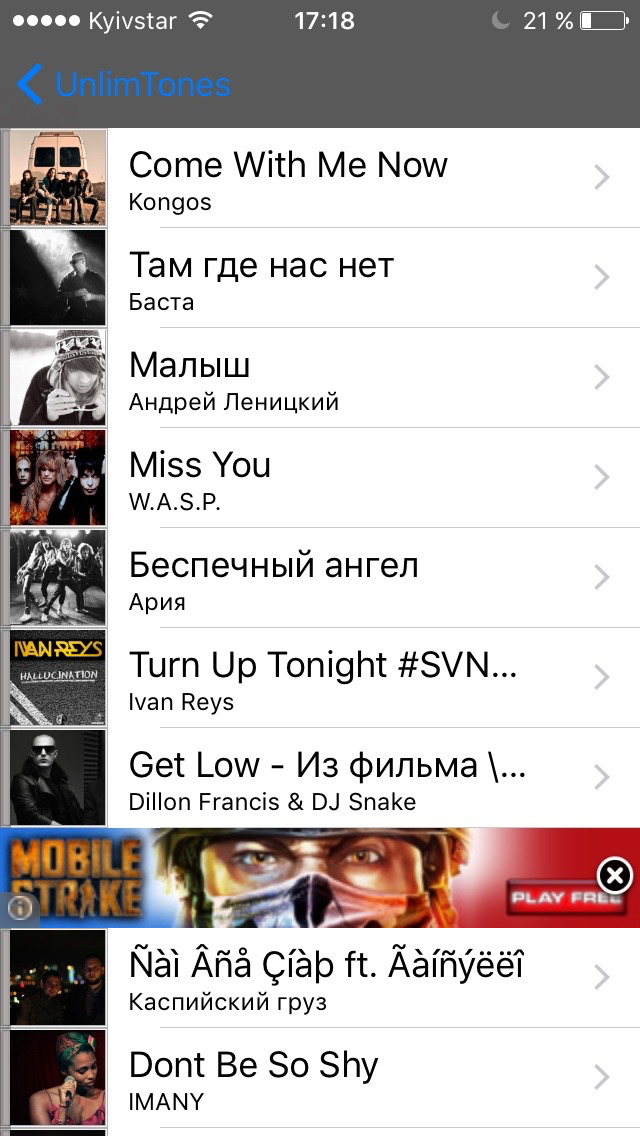 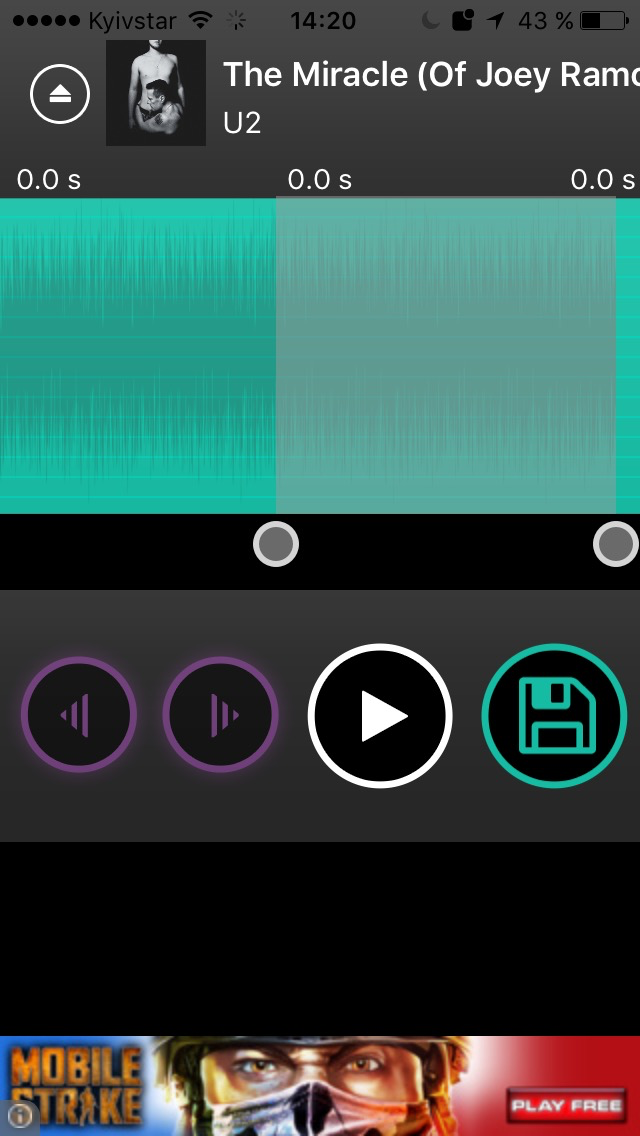 Apple users often complain of restrictions on the ability to download music and video. Without a jailbreak, people can't download media files on their devices and play them in the native application. The Bridge tweak was created to solve this problem.

Main features of the Bridge tweak:

Another unpleasant aspect of devices that aren't jailbroken is that users can only install applications in iOS from the App Store. This problem is partially solved by vShare or Tongbu; these solutions, however, are quite unstable. AppCake is a much more preferable option.

Another popular function is the transfer of files using Bluetooth. The AirBlue Sharing utility has, over the course of its long development history, been designed for just that. This solution allows users to exchange files with any device (not only Apple devices). Simply select the desired file in the device's file system and send it with the Send button.

If you want to set up quick controls for different device functions with the help of their hardware components (display, accelerometer, switches), you need the Activator tweak. This tweak is so popular that many jailbreak developers only write tweaks that can be activated using it.

The problem of recording phone conversations remains a real issue for many iOS device users, and App Store applications can only do so much to solve it. This feature can be added using the AudioRecorder tweak. 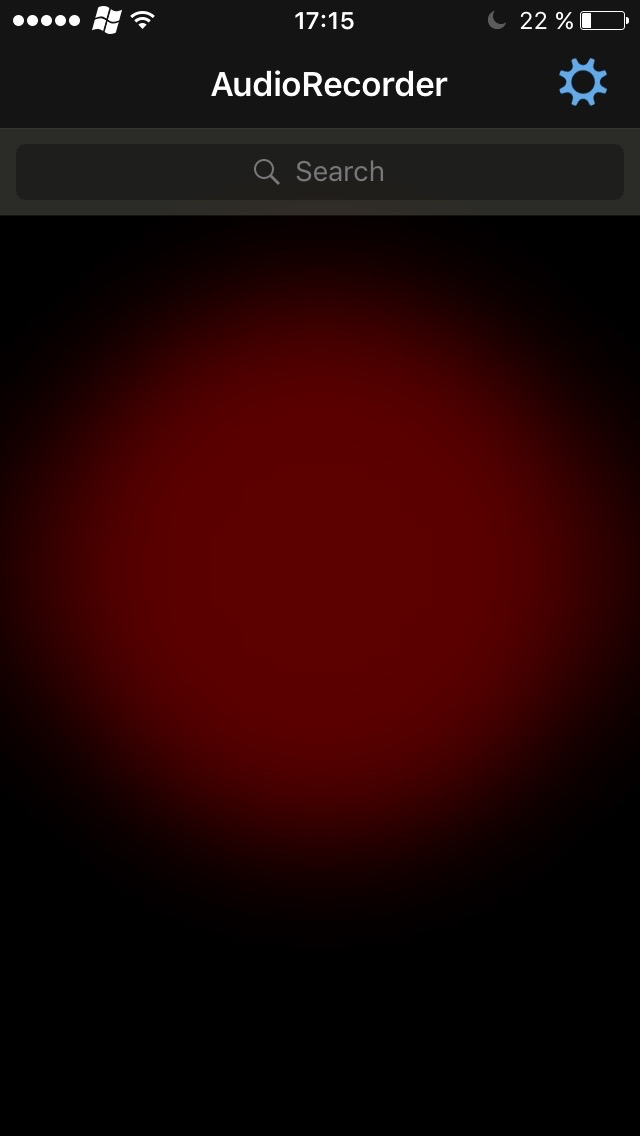 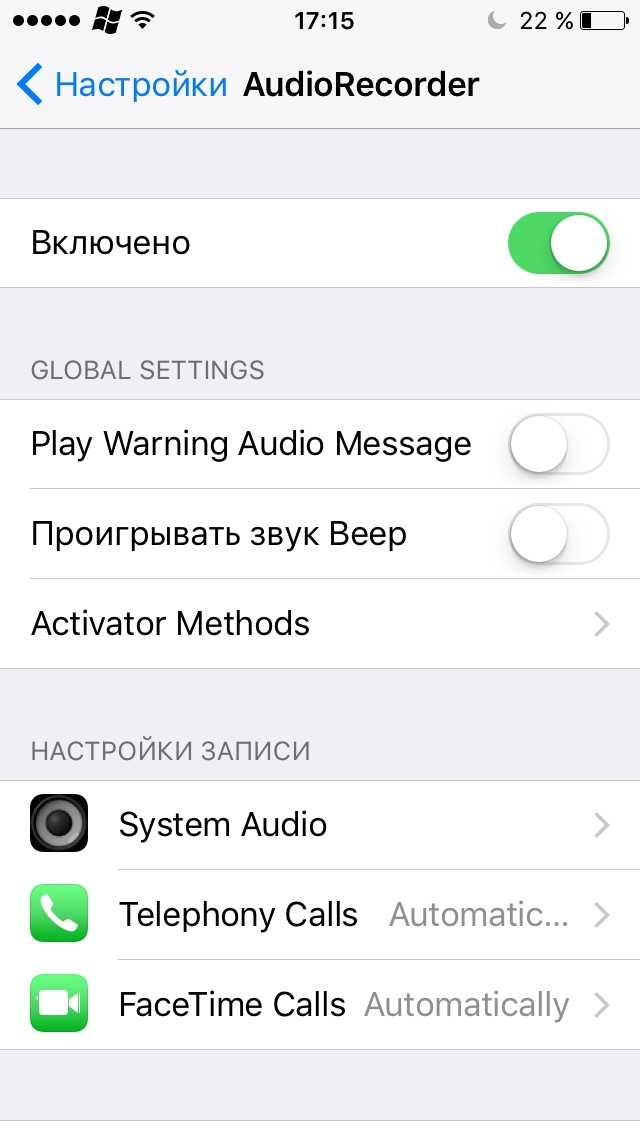 If you want to use your device as a wireless router, you need the MyWi tweak. It creates a hotspot in a single click (supports the distribution of Internet via Bluetooth, Wi-Fi and wired connections). 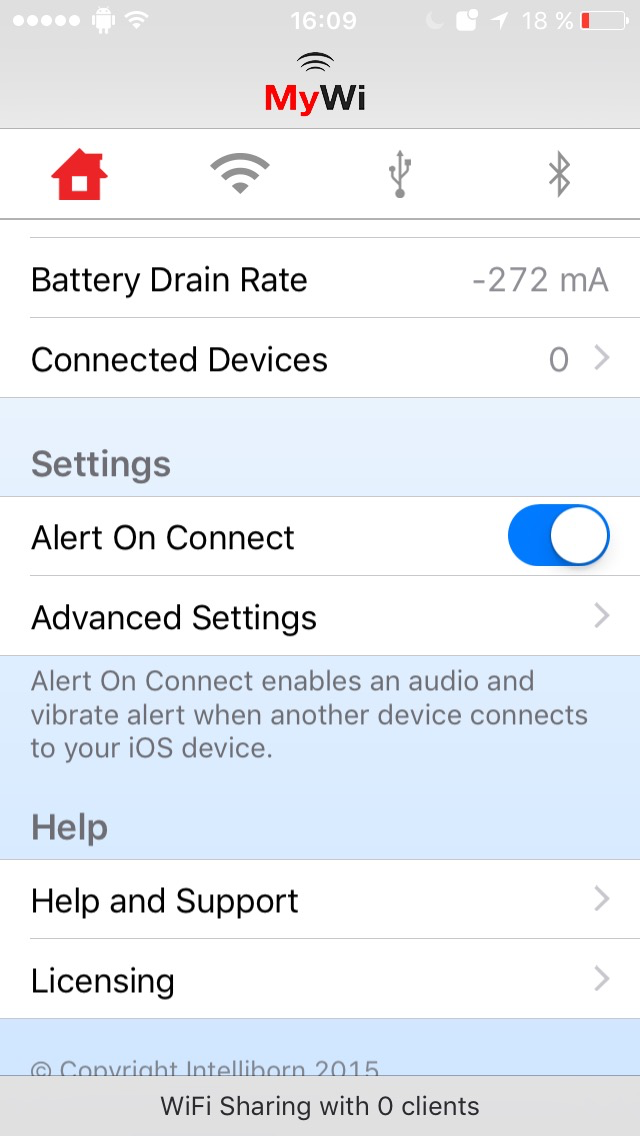 Jailbreak tweaks and utilities let users expand iOS device functionality to a practically endless extent. You'll be hard pressed to find a function that can't be implemented with these solutions. In this regard, it's important to understand what functions you really need, so you don't end up installing anything you don't. All tweaks mentioned in the article are quite stable and don't come into conflict when started together; however, if they run at the same time, this might affect the device's energy consumption and slow operations down.

What do you think about HackMag.com domain name?