Nmap is an iconic scanner broadly used by hackers, and many of them are wondering how to expand its capacity. In most cases, Nmap is used in combination with other software tools. In this article, I’ll explain how to use it together with your favorite utilities. After all, it is much easier to push a button and get the result rather then endlessly repeat the same sequence. Nmap scripts enable hackers to hack networks in a more automated way and help system administrators identify and eliminate built-in vulnerabilities in their protected perimeters.

A few words about Nmap

I have no doubt that the majority or our readers know what Nmap is, and frequently use it to scan networks and collect information. For those who have never heard of Nmap, I am going to refresh the background.

As said above, you can expand the Nmap capacity by writing custom scripts. Any hacking attack or pentest begins with intelligence and data collection. One of the first steps is checking the tested host for open ports and identifying the running services. Nmap is the best tool in the world for that purpose. At the next step, you either search for an exploit to the vulnerability identified in the service or try to guess the login and password using the brute force method.

For instance, you frequently use THC Hydra, a brute-force password cracking utility, to recover passwords to a few of services (e.g. HTTP-Basic, SSH, and MySQL). By default, you have to set Hydra against each service separately and keep in mind their specific features and flags required to launch the cracking utility. But what if you have to brute-force more services, maybe five or ten? Why not automate this process?

Today, we are going to write together a simple script to automate the THC Hydra launch process. We need Hydra to guess logins and passwords to one of the services (e.g. PostgreSQL). The following tools are required:

If Nmap and/or Hydra are not installed on your machine, I suggest to fix this immediately:

Nmap scripts are text files with *.nse extension. So, open your favorite text editor and create a new file. I am going to use Vim:

Every script has a certain structure. In addition to the code that automates some actions, it includes the following fields: script description (i.e. its purpose and user manual), information about the author, licenses, dependencies on other scripts, category, etc. Let’s examine each of these fields in more detail.

These fields expectedly contains the script description, as well as author’s comments, an example of the script output, and information on its additional features.

For our script that’s supposed to break logins and passwords to PostgeSQL, the description will look as follows:

The string starting with@usage presents the script launch format. In this particular case, only the script name (hydra) is provided. This is sufficient if the script is located in the directory /; otherwise, we have to specify the absolute or relative path to it. Later, we are going to enable the setting of arguments in the command launching the script. Arguments are set using the flag --script-args ". In this particular case, we will set paths to the file containing logins (lpath) and the file containing passwords (ppath). Generally speaking, these arguments are not mandatory: by default, the script will search for login.txt and password.txt in the current directory.

The author may specify the category (or several categories) of an NSE script. This is helpful when an Nmap user wants to use a set of scripts belonging to the same category. Below are a few examples of script categories:

For instance, if we need to launch all scripts belonging to the auth category, the command will look as follows:

In that case, scripts of this category will be launched for the specified host one by one. Our script belongs to the brute-force (‘brute’) category. So, we add the following string to the text file:

Every script contains information on its author. In my case, it will be:

Nmap encourages users to develop and share their creations, including NSE scripts. By specifying the license information, you confirm the right to share the script with the community. A standard Nmap license looks as follows:

Let’s add this line to the script.

This field contains the names of other NSE scripts that should be run before this script in order to retrieve the required information. For instance,

In our case, this is not required; accordingly, we won’t add the Dependencies field to the script.

Nmap has to know for what services to run the script and on what ports. These aspects are regulated by special rules:

Special libraries are used to create the above rules. In our script, we only have to set the port number (5432) and service name (postgresql), and it will work only with these port and service. NSE includes a popular library named shortport containing various methods. We are going to use the following method:

This method returns true if a service mapped to a port from the ports list or included in the services list is being currently analyzed; in addition, the protocol and state are checked; otherwise, the method returns false.

To instruct the script to scan PostgreSQL, we have to add the port number and service name;

Let’s put aside the script structure for now and install some extension libraries whose capabilities are required for our purposes.

Similar to other programming languages, variables must be declared and initialized first. In Lua, this process is simple: all variables are declared using the local command:

But first, we have to install libraries. In Lua, this function is implemented through the keyword require. In the very beginning of the script, we add:

The above commands load the following libraries:

More information on the libraries can be found here in the Libraries section.

By calling up these global variables, we get access to the libraries’ functions.

This is the most important part of the script. The action block describes instructions to be executed. As you remember, we are writing this script to be able to launch Hydra, view its output, extract the required information from it, process this information, and display as an Nmap table.

The structure of an action block looks as follows:

First of all, let’s declare all required variables within the action block:

Names of some services may be different for Nmap and THC Hydra: for instance, in our situation. Nmap stores the postgresql value, while Hydra accepts the postgres value as one of the flags. Therefore, we have to correct this value using the following condition:

In addition, we have specified the number of threads to parallelize this service (the task variable).

Now we have to create a table to store the findings obtained using the brute force method (i.e. logins and passwords) and add values to its first row (i.e. column headings).

In the first row of the table, we have specified the column headings. The next step is to check whether the port is open and form a string containing flags required to launch Hydra.

The following flags are required to launch Hydra:

In the end of the string, we specify the IP (or an IP range) and service name.

More information on the flags and THC Hydra can be found here.

The .. (two dots) operator is used in Lua for string concatenation. To execute the command formed in str, we will use the io.popen(str) function. It launches the str program as a separate process and returns the file handler that can be used to read data from this program and write data into it.

Hydra’s findings are stored in the s variable (see Fig. 2). 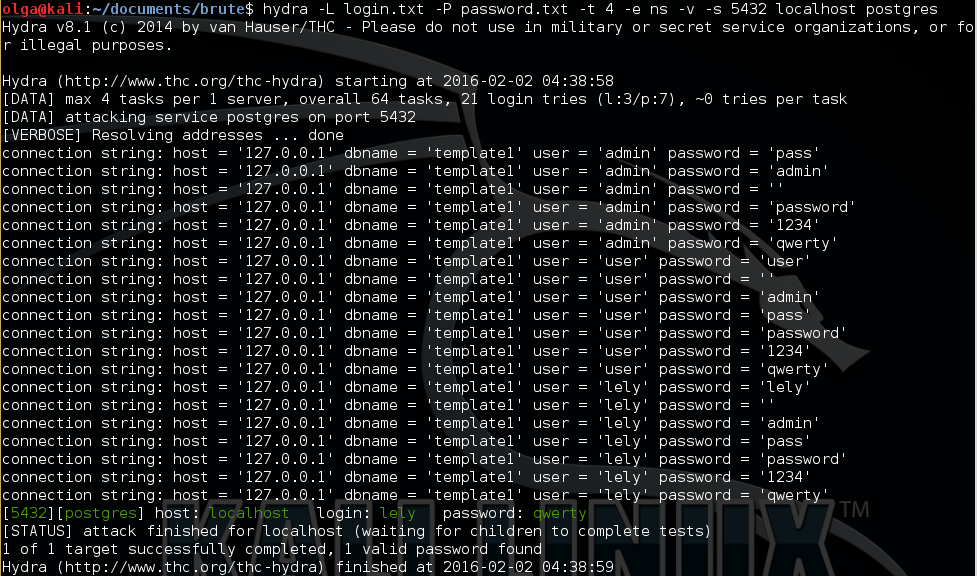 To understand whether the program managed to brute-force a login:password pair, we will use regex. The string library includes the match method; it will compare the string with the regular expression and place the respective values (if any) into the login and password variables.

The values falling into ([^%s]*) are assigned to the variables sequentially (%s means a space). The identified login and password should be added to the table after checking whether they actually exist or not:

At this point, we finish the service scanning and complete the cycle ( if (port.state == "open") then … end ). Next, we check the table. If new rows have been added to it (aside from the first row with headings), the values contained in them should be exported to the Nmap table.

When dealing with tables, Lua uses the # operator that returns the length of a string or a table. Other examples of # operator usage are available in the documentation. Now we have to close the action block (i.e. put the missing end).

We save the script in the folder /. Now we can run it and see the results. However, prior to doing so, let’s install, set up, and add a PostgreSQL user.

Voila! The service has been launched, and we added a user with a login and a password.

Add the postgresql user to login.txt with a password qwerty, which goes to password.txt:

Then launch the script:

The script performs its work, and we get a table shown on Fig. 4.

Fig. 4. The retrieved login and password are displayed in the Nmap table

Earlier in the article, I noted that that by default, the files with logins and passwords should be named login.txt and password.txt, respectively, and located in the current directory. Some users may want to change this, so let's add the following input parameters to the script:lpath(path to the file with logins) andppath` (path to the file with passwords). The command launching the script will look as shown below:

Accordingly, certain modifications should be made to the script. In the beginning of the action block, after the declaration of variables, add lpath and ppath as follows:

We have registered the arguments and set their default values. The command launching Hydra now looks as shown below (because variables path_login and path_password are now used instead of the hardcoded values):

Everything is ready, and the arguments are ready to use.

Our primary goal was to automate the work of Nmap and THC Hydra. The more services can be brute-forced using the same script, the better. So, let’s make a few simple steps and add more ports and services to the portrule:

Now the script can be applied to the newly-added services as well. You can always add more services, but some of them require further modifications. Normally, such modifications are minor and obvious (e.g. increasing or reducing the number of threads).

The full version of the script supporting an extended list of services is available in my repository on GitHub.

A new script may contain errors (e.g. ones related to the syntax or incorrect usage of some parameters). In such situations, Nmap warns us that the script cannot be executed and suggests to use -d flag (see Fig. 5). Accordingly, the command to launch it will look as follows:

The above command instructs Nmap to report errors. If the problem pertains not to the syntax, but to script logic, we can use the print operator to view the debugging output.

Fig. 5. Example of an error message

NSE is an excellent tool to extend the Nmap capacity. If you like this article and intend to create your own Nmap scripts, don’t forget to share them with the community. Good luck!